The Heart and the Bottle by Oliver Jeffers

On Thursday evening we had the pleasure of hearing Oliver Jeffers talk at the International Anthony Burgess Foundation in Manchester. He has made some of the best loved picture books including How to Catch a Star, Lost and Found, The Heart and the Bottle, The Incredible Book Eating Boy and the Great Paper Caper.

We arrived just in time, the room already packed with a hundred or so people, families, students, artists and book lovers. My son made a beeline for two empty seats right at the front, he was so excited. The man who created some of his favourite books was about to take to the stage.

Oliver Jeffers was a funny, warm and engaging speaker. Accompanied by his illustrations projected alongside him he introduced himself and spoke about his childhood, he was born in Western Australia and raised in Belfast and Australia. 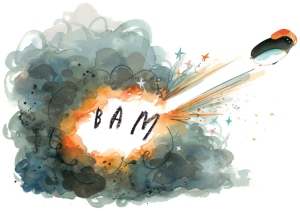 Up and Down by Oliver Jeffers

It was in Australia some years later, while sitting by the pier by Sydney Fish Markets, that he came up with a nugget of an idea for How to Catch a Star. He saw what looked like a star floating in the water and imagined scooping it out, much like the Brer Rabbit story of the Moon and the Mill Pond. He developed the idea further in his final year at the University of Ulster, upon graduating approached lots of publishers and struck a book deal with Harper Collins publishers.

He doesn’t write what he thinks children might like, he said ‘Who knows what goes on in children’s minds?’ He writes and draws what he would like to read, his books are for people aged 1-100. He is an artist and illustrator who likes to use words in his pictures, he works on both – the image and text at the same time.

He said three things make a great story, a beginning, a middle and an end. And he thinks despite all the new digital technologies that books will always be around. He thinks e-books and interactive books are new formats and complement the traditional picture book but will not replace it, which was heartening to hear. One of his own stories, The Heart and the Bottle, was released as an ipad picture book app a couple of years ago.

He spoke about the mediums he uses, watercolour, collage and digital all feature. He showed us photos of his studio in New York and his piles upon piles of sketchbooks, he keeps all his ideas and goes back to them a year or so later, an old sketch may spark an idea for a book.

After the talk the audience were invited to ask questions, my son asked if his hands ached when he had been drawing a while. He said that yes they do and when it happens he swaps hands. He also asked if he makes mistakes half way through a book and has to start again. Oliver Jeffers gave us some insight into how he makes a book, he has thirty two pages to work with and once he has decided what image will go on each page he grades each image – a,b or c. A being the easiest and c being the hardest. He works on the easiest images first and works his way up to the hardest and then he may go back and work on the easy images again. 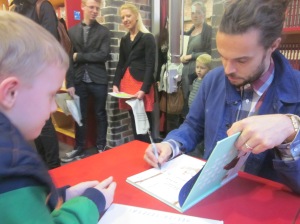 After the talk and questions he signed books, he drew a picture in everyone’s book – which my son was delighted with. The lady and her young daughter in front of us had ten books for him to sign and he was kind enough to sign them all. It was a really inspiring and interesting evening.

If you’d like to read more about Oliver Jeffers, check out this information page on his website. It contains Frequently Asked Questions, his tips for writing, drawing, style, his CV and his recent author film.

The Hueys in It Wasn’t Me by Oliver Jeffers is available now.

5 thoughts on “When we met Oliver Jeffers” 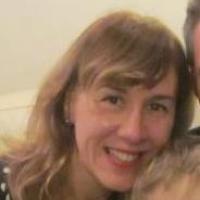 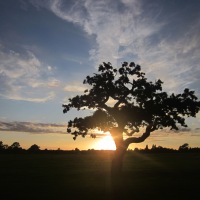